Those looking to move to Bangkok from another country may be surprised that housing discrimination is rampant in Bangkok. This article is to inform you about what is a common occurrence in Bangkok so won’t be caught off guard if it happens to you. Over the years in the Thailand real estate business we have seen various groups discriminated against, everyone from ethnic groups, people from specific countries, different sexes to people with newborn babies and many more. While some of the discrimination may sound unscrupulous, backwards and barbaric it is not often as malicious as it would seem as an outsider looking in.

First off just to give you a perspective of the situation, it is not uncommon in Bangkok for Thai landlords to not even allow their own (Thai) citizens to rent their condos/apartments! If this is a surprise for you, you can only imagine the various forms of discrimination which are commonplace in Bangkok. Most of the discrimination occurs with rental properties but there are certain properties which discriminate against buyers of various nationalities as well.

Are there any Laws in Thailand which Prevent Housing Discrimination? In Thailand there is basically no equal housing rights legislation. This is a stark contrast to the United States for example. In the U.S.A. Housing discrimination has been illegal for over 40 years with the Fair Housing Act which came to fruition in 1968. Federal law in the United States prohibits discrimination based on the following protected categories:

Why Housing Discrimination so Prevalent in Bangkok

Lack of any law means there is very little perceived reason to hide the discrimination. For example, in Bangkok some rental properties blatantly refuse tenants who come from ethnicities who are known for their pungent foods such as Indians. In the United States, this is illegal so the landlord may have a ‘no cooking’ clause in the lease which is not against the law but exists essentially for the same purpose.

While the vast majority of Bangkok residents are ethnic Thai and Thai-Chinese, Bangkok is a melting pot with people from all different countries, backgrounds and ethnicities. Social factors aside, housing discrimination ultimately comes down to the beliefs of each individual property owner. Some of the property owners who have had a single bad experience with a person of a certain nationality or ethnic group, may immediately blacklist that entire ethnic group from renting their property. While most would consider this blatant racism, ignorant prejudice or lack of education, perhaps the reason for the abundance of housing discrimination in Bangkok is simply due to the fact that as overcrowded as Bangkok is, there is still an over abundance of housing available in Bangkok. Perhaps the landlords know they will eventually get a ‘more desirable’ tenant to rent their property and in turn they are not hurting anyone by discriminating. 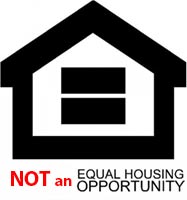 The most common form of discrimination in Bangkok is ethnic group preference. Surprisingly this has not only been an issue with individual condominium owners, but even large apartment buildings, some which are owned by large publicly listed corporations have the had similar discriminative practices. Over the years of being in the real estate business in Bangkok we have noticed quite a few examples of discrimination which range from ‘no Indians’, ‘no Koreans’, ‘no Americans’, ‘no children’, ‘no dark skin people’ to ‘Japanese Only’ and on one occasion a client who happened to be a pregnant woman was denied a condo rental because the landlord didn’t want infants and toddlers living in their condo for whatever reason. As you can see, housing discrimination in Bangkok can sometimes seem completely random or incoherent but it exists.

How to deal with Bangkok Housing Discrimination

The best option is to simply ‘turn the other cheek’ and pursue other options. As mentioned previously there is no legislation in place in Thailand that gives you any rights with property landlords so the best thing to do is simply move on. As with most situations, getting angry and doing something stupid will get you nowhere in Thailand. If you feel the urge to do anything about it, detailing your experience on a review of the establishment that discriminated against you, posting on the applicable social media site or better a letter to a local newspaper such as the Bangkok Post or The Nation will get the word out and hopefully pave the way to future government legislation.

Share your Experience w/ Housing Discrimination in the Comments Section Below ▼

We value your business and guarantee you will find your dream home in Bangkok or anywhere in Thailand. Use the detailed email contact forms for Rentals or Sales or call/SMS us at +66 (0) 82-991-7669 (Line ID: Kriszd) to schedule a viewing or inquire about a home that meets your specific needs.

Our Latest Properties for Rent

Our Latest Properties for Sale